Seeing a new look of the Chinatown in Bangkok
through Samyang XP 14mm F2.4 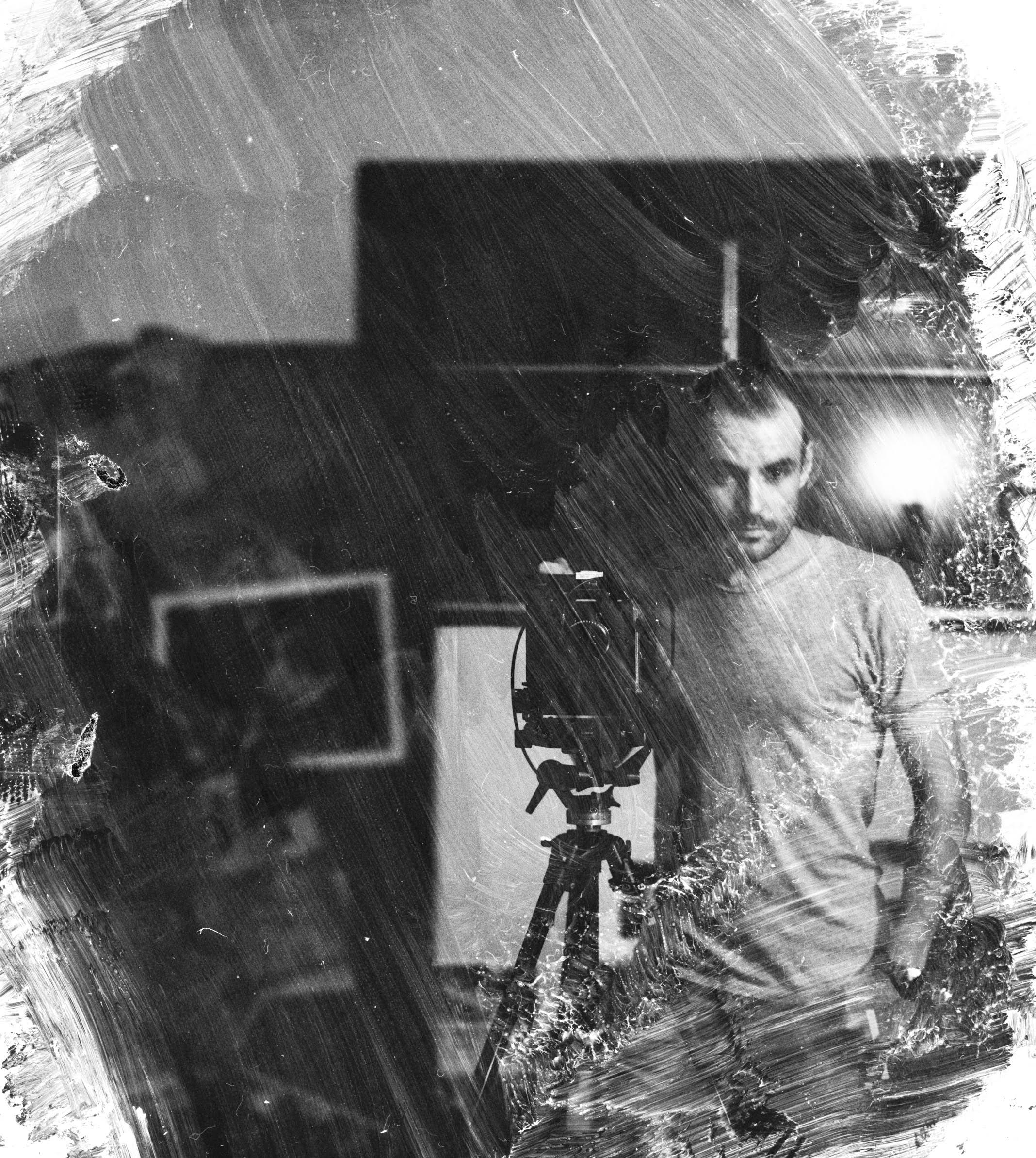 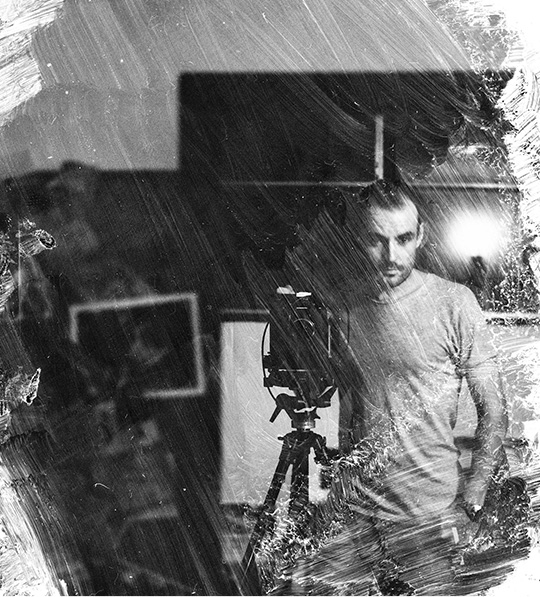 French-British artist Cedric Arnold was born in 1976 in the UK. While studying history and linguistics at the University of Paris, he first took up photography and filmmaking. He later trained in London at the London School of Photojournalism, studying under Eamonn McCabe, then picture editor of the Guardian newspaper. He joined the Sygma agency as a correspondent in London and Belfast.

In late 2001, he moved to Bangkok, representing Corbis Sygma, and began working as a photojournalist in the South East Asian region, collaborating with publications such as Le Monde, Time Magazine, New York Times, The Sunday Times, Newsweek, Stern, and many others.

In 2004 he began exploring more personal projects, showing his work that year during the “Month of Photography, Bangkok” In his personal work, Cedric is often drawn towards memory, time and the physical marks time leaves behind.

Cedric’s work is part of private, institutional and museum collections such as the SOAS and British Library Collections. He has show his work at National Museums, at festivals and galleries world wide.

Bangkok is a city for extremes. It lends itself so many possible artistic interpretations.
As a photographer based in Bangkok for the past sixteen years I have documented the city in so many ways with every format
imaginable, from 4x5 film to 35mm 6x6, 6x9, Polaroid cameras, Lomo and Holga cameras, and of course digital.
No matter the format, I am always drawn to documenting the lives of people in this ever changing multi-layered city.
I often shoot portraits and documentary series here as well as short films.
My lenses of choice in the the full frame format are 50 & 35mm I rarely use anything else.

When I was given the opportunity to choose a single lens to document Bangkok for a whole project,
I certainly even surprised myself when I opted for the 14mm.
A lens I have only used once on a film set for just one day in my career! When I was given the opportunity to choose a single lens to document Bangkok for a whole project, I certainly even surprised myself when I opted for the 14mm. A lens I have only used once on a film set for just one day in my career!

I am not a landscape photographer, rarely shoot interiors commercially and generally hate barrel distortion, so this seemed like the worst choice possible to match my style of shooting, which is usually low light and night time photography with wide open lenses. But I wanted to challenge myself to something new so I could try to document this city I know so well in a way I had not tried before.

In Hollywood, the 14mm is often referred to as the Gilliam (named after Terry Gilliam) because of its distortion when used close-up and how it helps convey and enhance the weird atmosphere in his films, a classic example is the Bruce Willis and Brad Pitt scene in 12 Monkeys, where they are filmed from above and get close to the lens. I actually love Terry’s work and had the immense pleasure of photographing him (with a borrowed 17mm lens actually!) ten years ago.

But save for some weird and comical effects, like that fun shoot with Gilliam, I never really feel the need for anything wider than 24mm in pretty much all of my work. 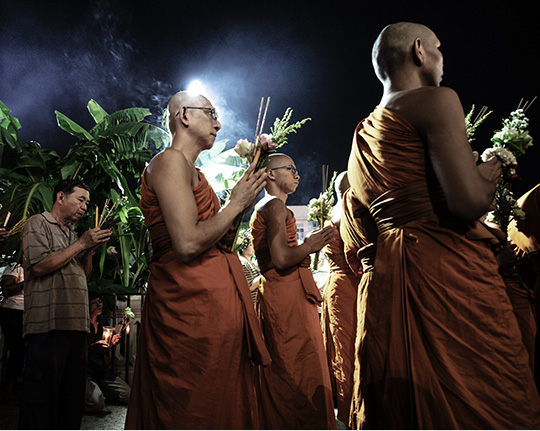 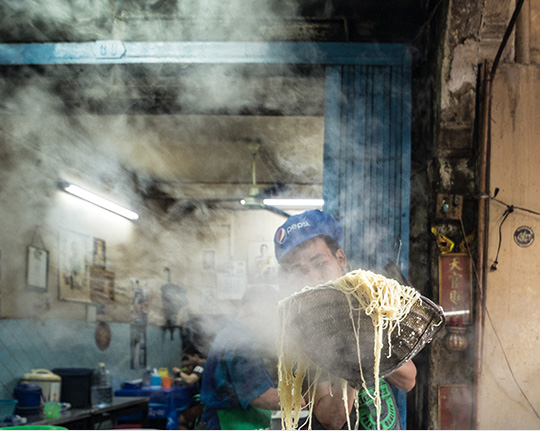 So the challenge was on.

I live in an older part of Bangkok, along the river and adjacent to Chinatown. It’s an area that is changing fast, bustling and chaotic, a neon wonderland, with street food everywhere, it’s noisy, hot, steamy and everything is in your face. One would never imagine it when walking down the main roads and tourist spots of Chinatown amongst all this chaos, but in the backstreets, you’ll find some truly unique and often quite magical scenes, it’s like a trip back in time, quiet, strange, and fascinating. I go for walks very often with either a small video camera or a stills camera, avoiding the noisy main roads. I often end up having long conversations with locals, many are third generation vendors living in dilapidated 80 + year old traditional shop houses, local monks at temples and Chinese opera performers. Their way of life is under threat and for many the tradition will end when they retire. Their children are studying or have studied to be doctors engineers, bankers etc… And with fast changes in the neighbourhood many think that within 10 years they will probably have to move abandoning in some cases over 100 years of local family tradition. 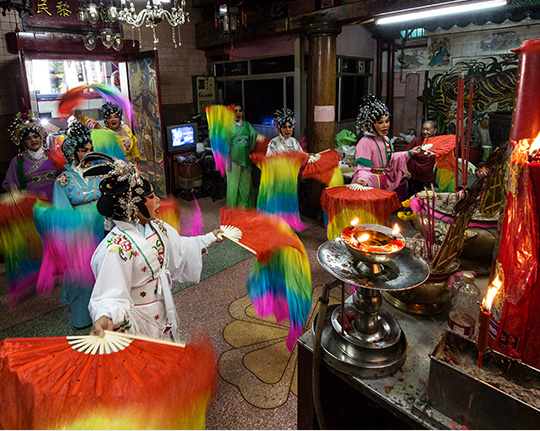 While this felt familiar,
this time I just had to go a LOT wider.

Even though I was very pleasantly surprised by how little distortion this lens displayed, I kept wanting to get closer but often backed off when I saw lines distort and circular objects in the foreground start to look very strange. I soon became obsessed with keeping vertical lines straight and kept using them as a point of reference to decide how close I could get. I began to wonder if I was completely mad to have chosen this lens for my project! But then I started seeing things differently and really began to enjoy the challenge. The first step was one backwards, going against the classic photojournalist’s quote by Robert Capa “If your pictures are not good enough you’re not close enough” It’s a smoky, messy, frantic area of Bangkok but I always find oddly serene moments in the fascinating backstreets. Focussing I imagined , would be a breeze, since it’s such a wide angle lens, but because I was shooting wide open at f2.4 pretty much all the time walking at night, I found that live view and zooming in to check focus was really the only way to know what was actually in focus.

I found that to be a hindrance at first but it then became an opportunity to take my time in observing the right moment to shoot and noticed things I had not noticed before in the neighbourhood.

On special occasions Chinese Opera performers set up their own ramshackle stages on street corners with old worn out planks of wood and cover the stage in colourful PCV and tent material making a small back stage area behind or even under the stage, the super wide lens was very useful there to make use of those colourful backdrops. Markets, small alleys all became bigger.