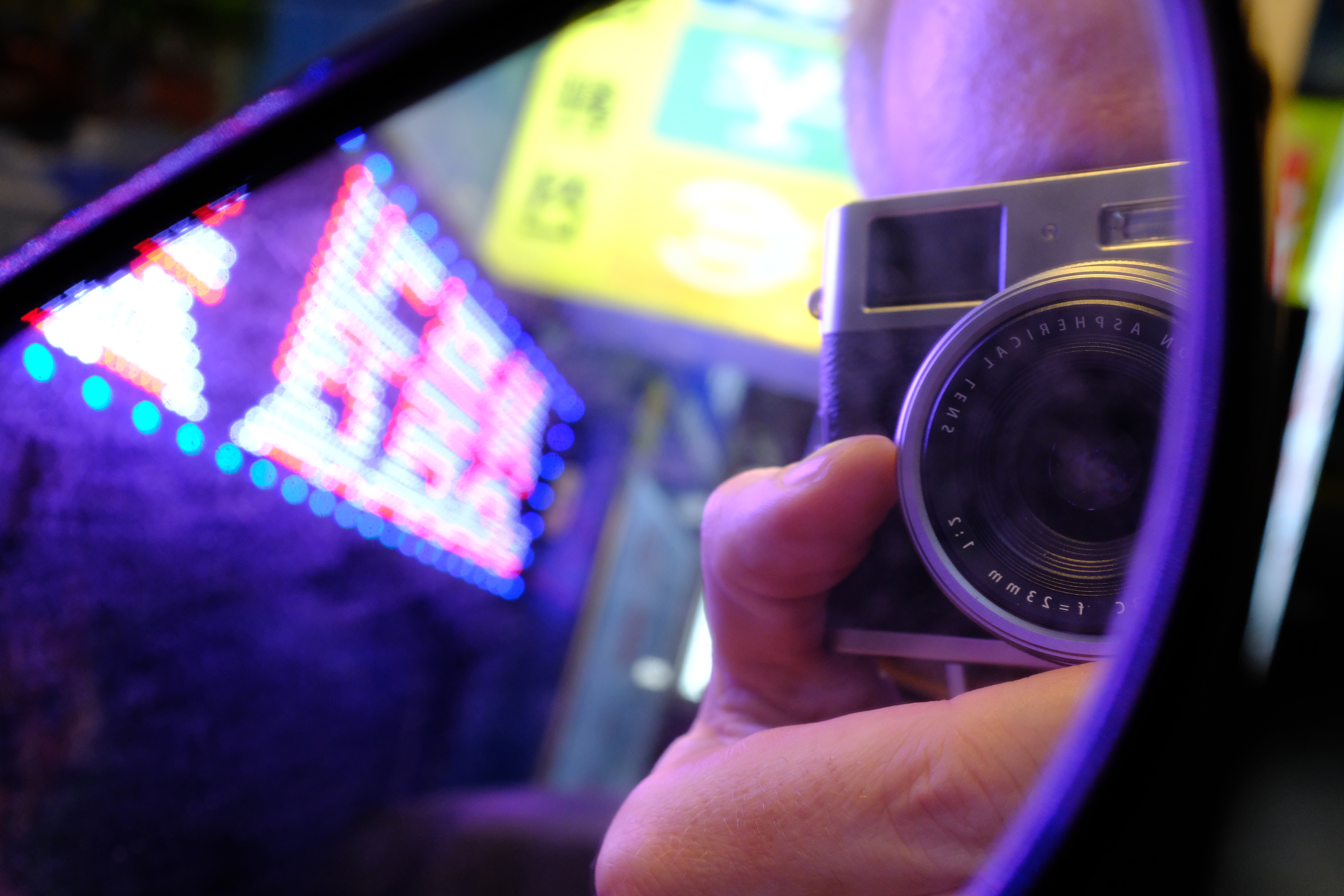 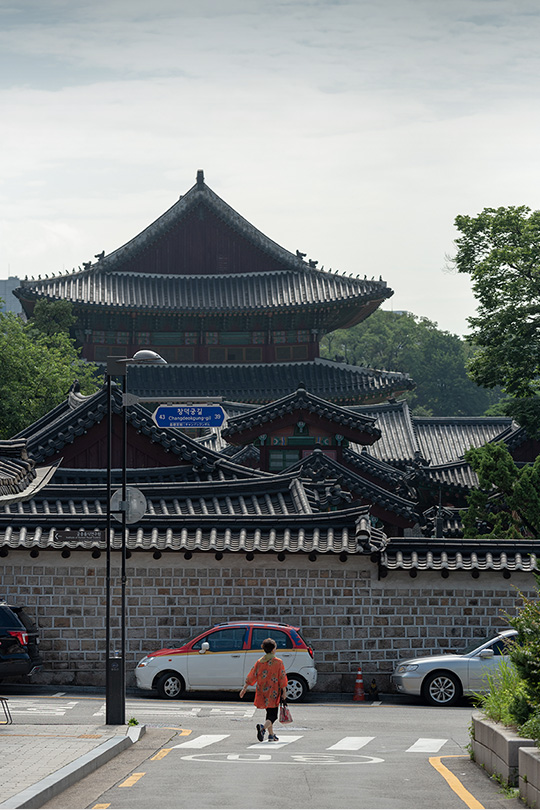 Bukchon Hanok Village is a place
where people live.

Though this might seem obvious, surprisingly many people seem to forget it. Seoul’s most iconic neighborhood of tile-roofed homes, or Hanok, is one of the city’s most visited tourist destinations. According to city statistics, about 10,000 tourists visit the neighborhood a day, with foreigners accounting for about 70 percent. Come here on a weekend, and you could probably crowd surf from one end of the neighborhood to the other with your feet never having to touch the ground. Nevertheless, Bukchon is a residential neighborhood, and always has been. This is no folk village. It’s a living, breathing community, albeit one struggling with endless herds of tourists and ever-rising rents.

Though I live in another part of Seoul, I’ve been lucky enough to work in the Bukchon area for over the last 10 years. I spend more time here than anywhere else in the city, making it my home, at least in a certain sense. It’s certainly one of my favorite places to shoot, too - even stroll during my lunch hour yields plenty of photographic opportunities.

Though rainy nights are my favorite time to shoot, I spend rainy days in cafes. There are worse ways to spend a day than relaxing in a coffee shop, sipping an espresso. At any rate, it’s an opportunity to catch up on reading. One of my favorite coffeeshops is a renovated Hanok just a minute’s walk from where I work. I go there at least three times a week, sometimes more. The place has been around for years. Though many cafes now pursue minimalism, sometimes to a fault, this one creates a warmer, more personalized vibe, an intimate space almost like your grandmother’s home. One rainy morning, I went to this cafe to get some work done. No matter how hard I tried to concentrate, however, my eye kept returning to the rear window. The window serves as a frame for a painting or photograph, bringing into the room the view of the tile roof of the house next door. Though I’ve seen it hundreds of times, the view mesmerizes me every time. Sipping my coffee, I watched rain water drip from the eaves. 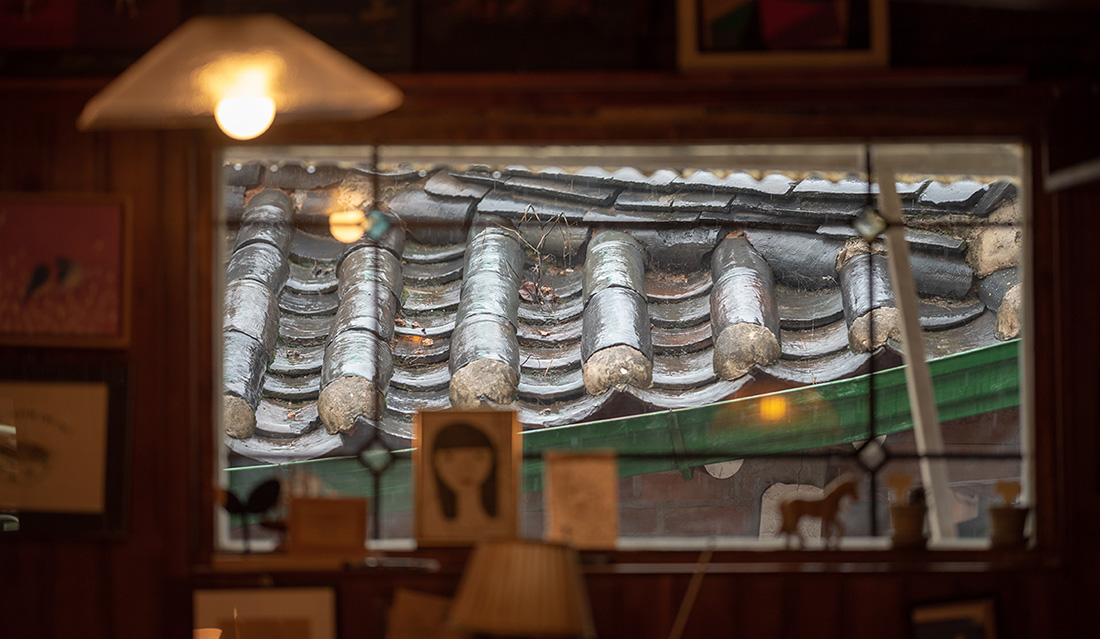 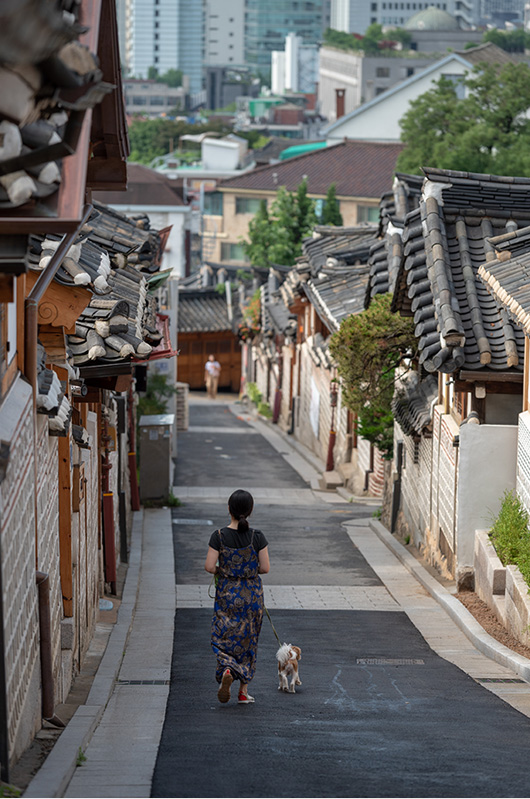 Bukchon has more than just Hanok houses. Like any neighborhood, it has many restaurants, grocery stores, laundry shops and other businesses. Though rising rents are forcing many to close, many persevere, supported by patronage from loyal local customers and the ever growing number of visitors.

They alleyway in front of our office, for instance, boasts plenty of restaurants and shops. Some, like an instant noodle shop I frequent, have been around for decades. Others are of much more recent vintage. Ordinarily, tourists would fill this street, but thanks to the rain, it was blissfully quiet - just a loan woman and her umbrella.

Despite having grown up in the United States, I do not know the English names of many flowers and trees. Often, I’m forced to look them up in the dictionary after learning the Korean names first. As I came to Korea when I was just 21, I never had the opportunity to experience those flowers, those trees in the land of my birth. It was only after coming here that I could experience their beauty. One such flower is the trumpet vine. Every summer, these creapers with large, orange conical flowers cover fences and walls all over Bukchon Hanok Village. They make for great photographs - this time of year, my Instagram feed fills up with shots of the flowers, and I’m always running into young couples taking selfies beneath the vines. Despite seeing them every summer for at least the last decade, however, I didn’t know what they were called in English until this year, when I finally decided to look up their Korean name - neungsohwa - in the dictionary. Interestingly enough, the trumpet vine is indigenous to the eastern regions of North America, where I was born and raised. Yet When people think of Bukchon, the first image that comes to mind is that of 31 Gahoe-dong. Often likened to Lombard Street, San Francisco’s iconic road of hairpin turns, 31 Gahoe-dong is a hillside community of terraced tile roof homes and narrow alleyways winding up and down the heights. The view from the top of the hill is one of Seoul’s most symbolic as the glass and steel of the city’s future loom over the tile roofs of its past. 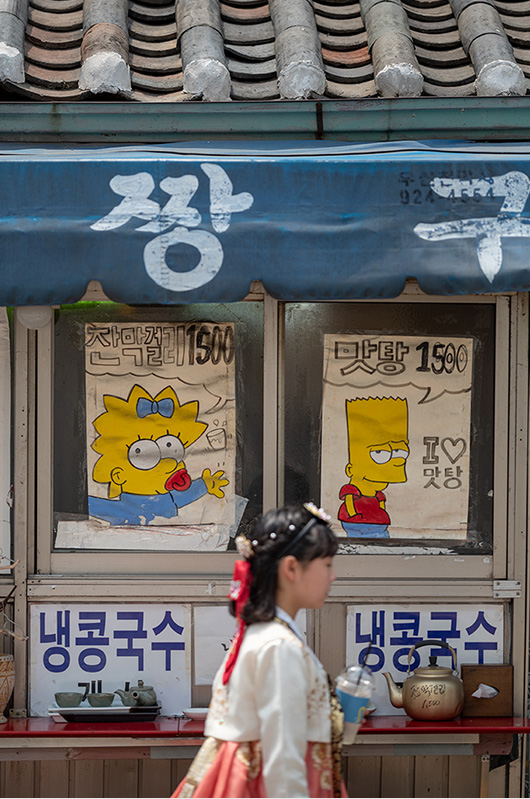 That such a beautiful place attracts many tourists should come as no surprise. From morning to sunset, this road is clogged with large groups of tourists, many dressed in rented Hanbok, Korea’s traditional attire. So many visitors descend upon the place, in fact, that some residents are moving out because of the noise and other inconveniences. Other are taking to the streets in protest, much as angry locals have in other heavily touristed cities such as Venice. Nowadays, multilingual signs plaster Bukchon’s alleyways, banners pleading for tourists to keep quiet and respect their privacy. The city recently announced measures to limit the hours tourists can visit the neighborhood, though this may prove difficult to enforce.

As I often have to come to work early, I sometimes walk Bukchon’s alleys in the dawn hours, when the tourists are conspicuous by their absence. As the morning sun casts a warm hue on the roof tiles and a wind chime rings in the breeze, the weight of the world lifts from my shoulders. In that moment, at least, it becomes clear why people chose to live here, why they continue to live here despite the availability of more modern, more convenient residential options 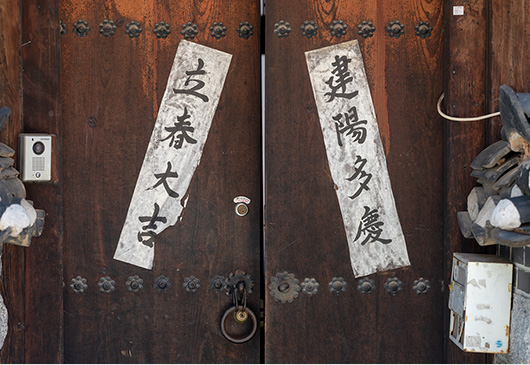 The more time your spend in Bukchon, the more you come to appreciate its many quirks. Take the front gates of its homes, for instance. At first glance, the handsome wooden entrances may seem the same, but look closer, and you’ll see that the locks, doorknobs and decorative metalwork differ from house to house. Many doors mix traditional locks with more contemporary security measures, too.

You can also find sets of handwritten Chinese characters pasted on some doors. These characters, wish people health and good fortune in spring. In the old days, posting such banners to your gate was commonplace. Nowadays, however, you’re more likely to see signs asking tourists to keep their voices down or to stay out. I sometimes come across the unexpected as a stroll around Bukchon. One hot day, I stepped into the Bukchon Cultural Center to rest a bit. In one of its courtyards, some women were gathered under the shade of a wooden pavilion. They were wearing Hanbok, and gathered before them were a variety of colorful teas and rice cakes. They were holding a Korean tea ceremony, they told me, offering me a cup of refreshing lotus blossom tea.

Built in 1921, Bukchon Cultural Center was originally the home of an aristocratic family. Since 2002, the city has used it as a tourist information center and as a meeting place for the local community. Despite its new role, the old mansion retains its original grace, every angle demonstrating the sophistication and elegance of traditional Korean architecture. Where the Simpsons meet rice wine

Like any gentrifying neighborhood, Bukchon has more than its fair share of Instagram-friendly cafes and trendy eateries serving carefully presented dishes from all over the world. And yet, you can also find places that have withstood the test of time, shops that continue doing things the old way because, sometimes, the old ways are still the best ways. Wangjjanggu Sikdang, for instance, has been serving cold Korean rice wine, or makgeolli, and candied sweet potatoes for as long as I have worked in Bukchon. Bukchon Sikdang takes pride in its simple, family-style Korean meals - rice, soup and side dishes. If you pass the Daegu Sesame Oil shop at the right hour, you might get a nose-full of the rich aroma of its oil, oil it has been producing for over 40 years. These shops remind people that as much as neighborhoods change, some things never do. Robert Koehler writes and takes photograph for Seoul-based publishing company Seoul Selection, where he is the editor-in-chief of the monthly magazine SEOUL. A native of Long Island, New York, he has lived in Korea since 1997.

You can find his work on Instagram at @rjkoehler74
and on Tumblr at rjkoehler.tumblr.com