Fast ultra-wide-angle lenses: wider than 16mm and faster than 2.8, they are ideal for shooting astronomical themes which may be hard for panorama stitching, such as time-lapse, star-trail, aurora and meteor shower. As optical technique develops, many new designs flourished in recent years, of which I think the Samyang’s 14/2.4 XP is the most stellar one. The fast F2.4 aperture means it is more efficient in collecting the photons from remote stars and nebulae than any F2.8 primes, and it corrects the annoying optical aberrations – coma, astigmatism and chromatic dispersion that cause nasty artifacts in nightscape pictures – better than any 14-15mm lenses I have ever used, and as an astrophotographer for over 5 years I have used a lot of them.

Below I would like to share two stories on planning, shooting, and editing a spectacular astronomical event – a total eclipse of the moon -- with the help of Samyang 14mm F2.4 XP lens. What you are looking at is the trail of night sky during a total lunar eclipse that took place on the night of January 31, 2018. The picture is a stacking of a time-lapse sequence of 990 pictures spanning nearly 3 hours. The “Q-tip” shape is the trail of the moon, which turned dim and reddened during the phase of eclipse due to its reflection of sunlight being shadowed by our Earth.

The picture was selected by NASA as its Astronomy Picture of the Day (APOD; link), one of the most pursued honors for amateur astronomy photographers.

The most common way of shooting a lunar eclipse is making a “close-up portrait” using a very long lens, showing the details of the reddened moon. However, I prefer the astro-landscape photography style, which means using a wider shot to take in not only the skyscape but also the earthly foregrounds to give viewers a feeling of environment. Yet using a wide lens will make the moon very small and insignificant in the image. Finally I decided to shoot a moon trail.

I used the PlanIt! APP to prepare for the shoot. It is an incredible APP to help nature photographers to plan ahead. If you haven’t tried it already, try it! For example, it even has a “solar/lunar eclipse sequence” mode: 1. If I aim to record the trail of the moon for the whole duration of the eclipse (around 3 hours) and use a landscape orientation (because I want to make a time-lapse video), I need a lens at least 14mm wide; otherwise I would either miss the higher trail of the moon or lose the foreground;

2. The trail of the moon was not as nice as I hoped (in my part of world); it spanned only a small part of the sky, so that I would need some strong foreground to balance it.

Knowing what I was looking for, I took the Samyang 14/2.4 XP lens with me and started scouting for the location. In short, I finally decided to make this shot on a remote reservoir. Three hours of driving from Beijing, its clear winter sky is away from the light pollution, and the frozen lake surface provided an open space (and a playground!) for our creativity. While scouting the whole scene I found this interesting-looking dead tree. It had an intrigue-looking silhouette, and it was sitting in the right direction. I decided to use it as my foreground: The exposure for the time-lapse was tricky. The full moon before and after the eclipse is so bright that it makes the night look as day, yet during the total eclipse the moon is as dim as a large red star and the milky way is fully revealed. Aiming to show the difference in the brightness of the moon, I decided to use a fixed exposure at ISO500, F2.4 and 10 seconds. The lens was adapted to a Sony A7S camera.

This is the resulted time-lapse. Notice the revelation of the milky way during the total eclipse, and the reappearing of the shadow as the moon recovered its luminance!

1. Selecting the shadow of the tree in the final shot as the foreground;

2. Selecting a moment when the tree was accidentally flashed by the headlight of a passing car, which added a golden lining to its profile: Combining all these details, I got the final image: I enjoyed the process of making this shot massively. It was a combination of skills, familiarity with the location and the astronomy events, and some creativity. I also enjoy using the Samyang XP lens. As promised by its propaganda, the lens corrects aberrations so well that I don’t hesitate to shoot it wide open. This enables me to use lower ISO on my camera for a broader dynamic range, which helps to hold the moon from being blown-out too much while keeping enough details during the dark hours to show the dim winter milky way. The resulting image is pin-point sharp, from the foreground in the middle to the background star trails at the very edge.

Bio: Haitong Yu is a landscape and astronomy photography enthusiast based in Beijing, China. He is a contributor of Gettyimages and a cooperating photographer with Hasselblad. His nightscape pictures have been awarded top international awards in this field: Astronomy Photographer of the Year by Royal Greenwich Museum (2017, skyscapes group winner) and “International Earth &; Sky Photo Contest” by TWAN (2017, beauty of night sky, composite group winner), and have also been selected by NASA and National Geographic as the Picture of the Day. 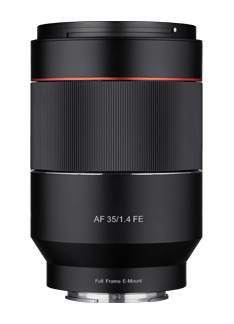 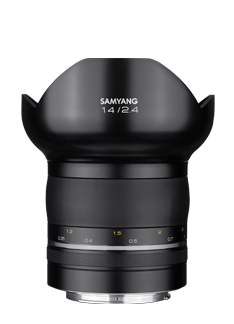 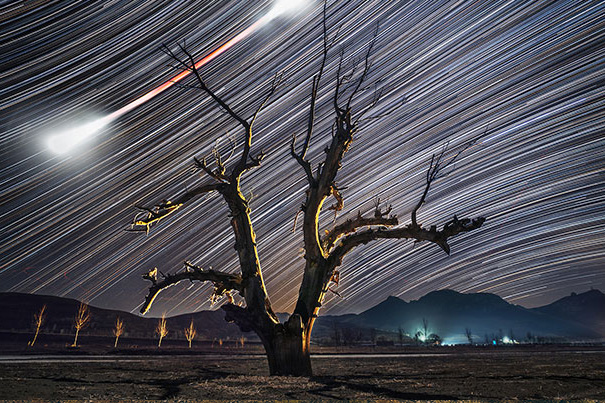